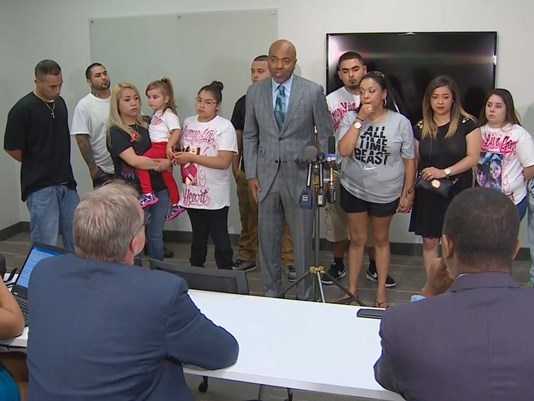 DALLAS – The family of Genevive Dawes along with her two little girls stood together and asked for justice.

In January, Dallas Police approached the car Dawes was in because it was reported stolen. Officer Hess shot 13 times into the vehicle. The mother of two died a short time later from her injuries.

District Attorney Faith Johnson says she will fight for the family. “It does not matter now whether you are black, brown or any ethnicity, I will fight for justice for the citizens of Dallas,” Johnson said.

Police say she was trying to flee. Hess and his partner, Jason Kimpel, fired into the car after they claim Dawes hit a police car and was backing up.

They feared she was going to hit other officers. Sources who have seen the video say no officers were in danger and Dawes was backing up at a slow rate of speed.

”We had an officer who made a decision. Two officers who made the decision to fire at an occupied vehicle that is what the story should be about and that is wrong,” said the family’s attorney, Daryl Washington.

The family is also demanding the release of body camera footage that captures what happened.

“I mean the chief of police has gotten on television, and said we want to get this for transparency. We want the public to know and see what happens, yet it is 6 months now and the public has yet to see what has happened,” said Washington.

Officer Kimpel was not indicted and faces no charges.

An arrest warrant has been issued for Officer Hess. He has arranged to turn himself in on Monday. Dallas police fires officers who have been indicted. He will most likely be fired sometime next week.